I received a copy of the most recent order in the matter of Friends of the White River (Petitioner) v. Department of Natural Resources and the City of Indianapolis (FW-27680). The order:

(1) Vacates the prehearing conference in the matter that was scheduled for September 28, 2015,

(2) Stays the effectiveness of the permit until a final agency decision on the matter is reached, and

(3) Allows the parties to develop a timeline for hearing the case (joint case management plan).

I spoke today with the Administrative Law Judge handling the case and asked her what this means.

She indicates this means that the tree clearing permit will not be effective until sometime after the final hearing on the matter. She also indicated that the parties agreed that the final hearing on the matter would not occur until sometime in January of 2016, and that the agency final decision would come sometime after that. She is in the process of consulting the agency calendar to determine exactly when the hearing might occur.

So, it appears tree clearing is off the table until spring of 2016.

Way back before Save Warfleigh began, we had a particularly wet Spring.  Here are some photos that I took from the levee wall on Riverview looking towards White River.

Please remember, we are NOT protected from flood waters until the levee wall is “tied into high ground”.  Currently there are at least two alternatives that have been approved by USACE.  Either of these alternatives would protect Warfleigh and the several thousand people that reside here. 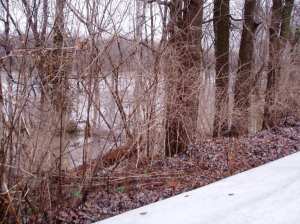 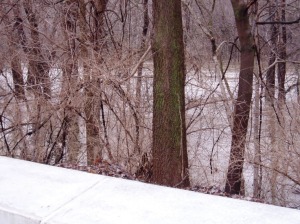 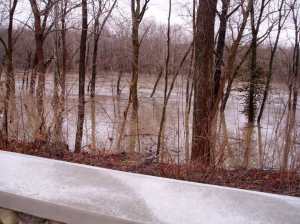 Several questions have been raised about the history of Warfleigh.  There is a great article written by Sharon Butsch Freeland on the Historic Indianapolis website.  Although it’s mainly about Arden, which is the neighborhood across the river from Warfleigh, there is some really good and interesting information about our the neighborhood of Warfleigh as well.

Here is an excerpt from the article:
“Meanwhile, there was quite a bit of activity going on in the Warfleigh neighborhood, which is the neighborhood directly across the river from Arden on the south side of the White River.  Warfleigh had been platted in the first decade of the 1900s, so quite a few homes had already been built in Warfleigh by the time of the country’s economic downturn, three decades later.  Thanks to the Works Project Administration, two significant changes occurred in Warfleigh.  One was that Meridian Street was rerouted to the east, which included the construction of a bridge over White River.  Prior to that time, there was no bridge on North Meridian Street.  In fact, the original Meridian Street simply ended at Riverview Drive.  With the newly built section of road being called Meridian Street, the old portion was renamed Meridian Street West Drive.

The second WPA project that would change the appearance of Warfleigh was the removal of the bathing beach on the south banks of the White River and the creation of a levee to increase flood protection.  Prior to the establishment of the Warfleigh Addition, the land between the Central Canal and the White River was owned by early settler Jonas Huffman and his descendants.  Dating back to the mid- and late 1800s, Huffman’s Grove had been a popular spot “out in the country” for city-dwellers to picnic or camp.  It was located along what became Riverview Drive in the section between College Avenue and Washington Boulevard, once Warfleigh was developed.  Apparently, people continued to use the parklike area and beach for many years after Warfleigh was built, until the levee put an end to that.”
Find the full article here

“Thanks – I managed to sell my house in July, but flood insurance was a big issue given the long delay on the project.  I wish everyone luck.  It’s bad for property values – I had to lower my list price – and the concern about increased rates is ridiculous, although I would have left NFIP and gone with Lloyd’s of London if I’d stayed in the neighborhood.  25% less per year.”